Christian education is one of the most powerful tools in spreading the gospel of Jesus Christ. Not only are you able to have a daily impact on the lives of the students, but opportunities abound to minister to the entire family. We have seen entire communities transformed through Christian education in the Dominican Republic.

The Dominican public schools were overcrowded, and many of the students had no books, notebooks, or writing utensils. With the help of Compassion International, Ben and Esther Woodring founded the school in 1978.

Located in a poor rural community, the Evangelical School of Jacagua provides a first-class education to underprivileged students. For several years in a row, the school has earned national recognition as several of its students have taken top places in national academic competitions.

In an effort to recruit better teachers for the public school system, the Dominican government has offered to triple the salaries of many of their teachers in order to draw them away. Because the Jacagua School servers a poor community and cannot charge high tuition, it is unable to pay its teachers a competitive rate. As a result, the Jacagua School has lost many of its long-time staff.

In the years since its founding, we have seen the community of Jacagua transformed through the ministry of this school and want to help ensure that it will continue this critical ministry.  As ministry partners and advisors, Koinonos assists in raising support, finding sponsors, and recruiting work teams. 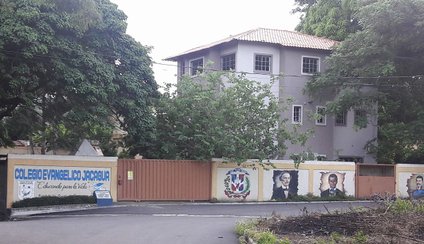 If you are interested in supporting the Evangelical School of Jacagua, please visit these two partner ministries.

Koinonos is a ministry of Tipton Baptist Church, is governed by a board of Baptist pastors & church leaders, and its financial accountability and donor services are provided by Central Missionary Clearinghouse.